San Salvatore is a successful business that had set its roots back in the time of Giuseppe Pagano. Peppino, as he was called, was an important businessman who at the time was working on two projects while stabilizing his life in the Cilento area.

At the age of thirty, Giuseppe Pagano took over the Esplanade Hotel in Paestum and then built the Savoy Beach Hotel. Both of these are situated at the centre of tourism in relation to the City of the Temples. When Pagano had realized that the growth of the sector had been reached, he decided to get back into business by setting out on the adventure of creating a wine company that would compete on a global level.

He looked back in time and remembered the experiences that he had had with his father. At the age of 11, Salvatore used to buy grapes with his dad, and make wine at the foot of Mount Vesuvius between Pompeii and Pagani.They hand turned quintals of stum that would become wine to sell privately and to restaurant owners.

When he visited the Ruffini estate in Chianti, he realized that it was a sign of the future. It was at this time that wine needed to become part of his life again. In order to do this, it was necessary to have a lot of land and in the Paestum area the costs of land were very high. For this reason he went inland into Cilento to find a solution. He travelled to Stio where he bought over 70 hectares of land.

Then he had called Riccardo Cantarella to his side, a former winemaker of the Feudi di San Gregorio, along with Carlo Naro, an expert in biodynamics and Mario Cavallaro of Eboli to take care of the transmission of data.

This team has been at his side since the first stone of the company was laid: "To do well I needed them by my side every step of the way moving forward with the business that I had put into motion.”

Cantarella warned him about the risk of investing everything on planting grapevines on the hills of Stio since he could only produce "extreme wines.” It is a production high at risk because it is linked to the weather which is unpredictable. This could give excellent harvesting periods or even bad ones, depending on the problems related to maintenance and production levels.

This is why Pagano had also decided to buy a buffalo estate at the foot of Mount Sottano. He bought 25 hectares in the town of Giungano, where as the winemaker had pointed out to him, there were all the reasons why things would go well. For example there was: "the right slope: 20%, in the face of the sea, with the mountain behind to protect it…”.The time required to prepare the vineyard planted on the side of the Tremonti gorge for production was 5 years. In fact, after having tilled the soil while removing the large stones, he piled it with chestnut wood burnt at the tip, worked the soil with natural systems to make it ready. Then the first sprouts began to sprout.

While he was waiting for the land to be ready, Pagano went back to a pre-existing job: he bought 100 buffaloes and then another 50, and he also started making mozzarella. With his earnings, he strengthened his economic foundations for his project, paying the costs while building a winery in the industrial area of Giungano.

In the meantime he has always worked in the right way with the right approach in order to make business. It is important make the best out of his business idea from a company that is devoted to organic farming in an area that is devoted to the history of Western civilization. "Magna Graecia, with Paestum and Velia, as homeland to Parmenides and Zeno, and the DNA of the land of Cilento, in Tristi, which has been able to keep unchanged its essential way of life just as UNESCO has recognized the Mediterranean Diet. A symbol is needed that will tell about all of this without being confused with the thousands of other pre-existing ones.”

Then there is another element that makes the San Salvatore farm unique. Its commitment to promote being green. It has three photovoltaic plants of 100 KW, 62 KW and 90 KW and one biogas plant of 249 KW. The farm spreads over more than 100 hectares and it has a green soul because it is credited for its electricity coming from renewable sources.

"There are over 1000 steps to be taken in the right direction to ensure that the biological process becomes a symbol of the product,” Pagano says proudly. Similar to the choice of the label applied to the bottles: a buffalo! It was his friend and artist, Bruno Banbacaro, who made the buffalo suitable for the label by stylizing the shape and making it unique and easy to recognize so that it became strong icon.”

He even chose various names for the wines which come from the "fidelity" of the territory where Pagano lives and where he was chosen from the very first moment: "I opened the map of the National Park of Cilento, Vallo di Diano and Alburni and immediately I was struck by the names of the villages near the land where the company had settled. By adding, altering, and removing some vowels or consonants, the company had respected the law that prevents the use of the names of local towns for commercial purposes. The company has also kept in mind the origin of the product unlike other products, it has kept its roots in the land where the product originally comes from!”

There is another artist who has left a mark in the life of Pagano, and it is Gillo Dorfles. The almost centenarian, Istrian, had arrived in Paestum thanks to an invitation given to him by Pietro Lista and Cristina Di Geronimo. They were the ones who introduced Gillo to Peppino, while he let him stay at the Savoy Hotel for various years while taking short holidays. Peppino had also taken them to his vineyard in Giungano and as they were visiting it, they were reminded of their parents' vineyard in Istria.

Gillo was the one who personalised the labels on the bottles by drawing them, while leaving his signature on 13 of them.

When the winery was ready, it was time to create, "la Dispensa,” which is an open space where the final products are directly available to the consumer. It is also a place where real housewives cook a few simple dishes that are served.

These days San Salvatore is a company that has a turnover of over 6 million euros per year, 70% which is projected for the Italian market and 30% abroad. It has 60 permanent employees, while the others are seasonal. In Italy its sales representatives are located in all of the regions. Abroad the biggest market is the United States, followed by Holland, Belgium, Norway, Russia, China and Australia.

A man who came from Pompeii is very motivated and he wants to leave his mark. He is taking on another business idea which is to recover, reorganize and create a cultural space in the archaeological area of Paestum. In a space of 15,000 square meters a Central European structure will be built. For this reason he delegated the construction of the project to an architect from Bolzano. He will have to turn it into reality making a place for international art at home.

No man is an island! That's why Peppino got emotional and, hadn’t waited for me to ask about it, he praised his wife Giusy: "He had never made me feel alone! Not even when I decided to leave the two hotels in order to dedicate myself to my dream. I had to appreciate the skills and determination that my son Salvatore had, and then that of my daughter Andrea. They had taken over the direct management of the business: I need to give them credit because they were able to impress me for their dedication to their work and the way they carried it out.”

Pagano is not a man who sets his alarm clock to wake up in the morning, nor does he look at his watch when the evening advances. However when he finally puts his head on the pillow, he sleeps deeply as a wisemen who has not left anything "untouched" giving a full meaning to his existence.

"Pessimists are always right, but only optimists change things!"

A man who had kept me nailed to my chair for over two hours, had also spoken like a flooded river. Letting go of more than half of what he told with passion and precision, while at the same time being optimistic. He is known as a brave but not reckless entrepreneur. Clearly in front of him was the road to travel and the picturesque which he painted on the canvas.

Only treatments only sulphur and copper, this year we started using ozone, allowing a 50% reduction in sulphur and copper.Ozone is an unstable gas with a high oxidizing power. It can destroy in a few seconds the microorganisms with which it comes into contact such as bacteria, fungi or viruses. For this his power is viewed with great interest by biocide those seeking an alternative to conventional products for the defense of the lives. The great merit of ozone is to be a natural gas, which is found in the atmosphere and leaves no residue on crops.In summary atmospheric oxygen is separated from the nitrogen and transformed into ozone through electric shock. The gas is then mixed with water that is sprayed on the crop or even injected within the soil to sanitize it.One of the positives is the effectiveness: Ozone is able to sanitise killing any micro-organism cultures with which it comes in contact. Although in open fields, compared to controlled environments, pathogen control is variable. Being an unstable gas leaves no residue on crops and you can proceed to the collection immediately after application. Finally has no environmental impact, since it is a gas that already exists in nature. In addition, acting oxidatively, cannot generate resistance pathogens.

As fertilizer used is the manure produced by our buffaloes, which once stored becomes humus suitable for plant nutrition. We do not use absolutely herbicides and chemicals to keep the concept of biodynamics. Another practice is used green manure cropping easy and natural, very used in organic farming. The technique of green manure is to cultivate certain plants intended then to be buried at their maximum development. Together with the vegetation, soil, underground precious nutrients will be able to increase soil fertility.

Through mulch the soil is enriched with organic matter, valuable humus which improves fertility and soil structure. Green manure increases the dry land water supplies, improving the physical structure of the most difficult terrain. In addition, the practice of green manure protects the surface layers by leaching and erosion and, if made with pulses, make a good amount of nitrogen.

Leaf removal is done manually, in addition to the ligatures are used the willows (local plant) instead of the plastic

The farm produces for the needs of Buffaloes the following products: hay, straw, maize silage, mixed grass silage, while from outside we use the following: Corn Flour, wheat flour, cereal flour (oat-barley-spelt), also every day 300 grams of flaxseeds for livestock.Flaxseeds have a high mineral content (especially phosphorus, copper, magnesium and manganese), protein (20%) and lipids (40%). Flaxseeds are small precious pearls of health. Among the components of these seeds is a must to mention polyunsaturated fatty acids, Omega 3 and Omega 6 forefathers, but especially the presence of mucilage. 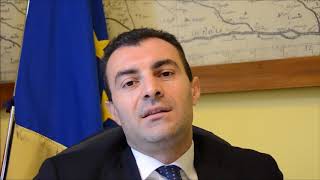